Quantum Computing is buzz phrase found across technical journals, websites and blogs.  The phrase even escapes outside the scientific and technical domain into general newspapers and television.  It is a recent concept; physicist Paul Benioff proposed a quantum mechanical model of the Turing machine only in 1980[1].

What is Quantum Computing?

Push a little further, especially push technical people, and the one thing they “know” about Quantum Computers is that they will destroy Internet security due to their ability to break encryption.  Is that reality?

A 2021 paper[2] suggests that with just over 13000 qubits a Quantum Computer could factor a 2048-bit RSA integer; the sort of operation required to break much existing Internet encryption.  Okay they wanted 177 days but that is still much faster than the “not before the heat death of the universe” answer for classical computers.  Another 2021 paper[3] suggests 20 million qubits would only need 8 hours.  But no-one working in security is surprised.  The problem has been known since 1994[4] and since then people have been developing cryptography resistant to Quantum Computers.  The USA’s NSA, 2015, along with the United Kingdom’s NCSC, 2016, announced plans to transition to quantum-resistant cryptography aiming to have standardised algorithms ready for 2022-2024.  NIST announced 4 candidate algorithms on July 5, 2022[5].

Given Quantum Computers are not going to suddenly allow everyone to read the world’s encrypted Internet traffic what are they good for?  Fast search problems and machine learning certainly.  Anything else?

Two physicists in 1980[6], Manin, and 1981[7], Feynman, answered this question.  Simulation of things you cannot simulate with classical computers such as quantum mechanical systems.  We can accurately model the quantum mechanics of simple systems.  Simple enough, a single hydrogen atom, can be modelled using pen and paper.  A few particles and we can use existing computers.  Bigger quantum mechanical systems cannot be accurately modelled at all without incredible simplification (though even this is useful). 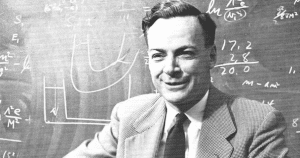 Feynman imagined trying to use quantum mechanics in our current computers to accurately model a system containing a larger number of items.  For some number of particles, N, across a similar number of positions in space you require memory to store, and processing to compute, NN configurations which rapidly gets too large.  Even for 100 particles you have around 10200 configurations to store and calculate at each step.  Compare that to estimates of 1080 atoms in the observable universe and it is impossible for classical computers.  It could be done with a quantum computer of the same order of magnitude of qubits, namely 100, because the qubits react in the same way as the system being modelled.

So what will Quantum Computers do?  Break Internet security?  No.  Give us better chemical processes and useful room temperature superconductors?  Quite hopefully, yes.

[1] Benioff, P., 1980. The computer as a physical system: A microscopic quantum mechanical Hamiltonian model of computers as represented by Turing machines. Journal of statistical physics, 22(5), pp.563-591.